Now reading: Why Is There Still A Toilet Paper Shortage?
Share
PrevNext

Around the world, in countries afflicted with the coronavirus, stores are sold out of toilet paper. There have been shortages in Hong Kong, Australia, the United Kingdom, and the United States. And we all know who to blame: hoarders and panic-buyers.

Well, not so fast.

Story after story explains the toilet paper outages as a sort of fluke of consumer irrationality. Unlike hand sanitizer, N95 masks, or hospital ventilators, they note, toilet paper serves no special function in a pandemic. Toilet paper manufacturers are cranking out the same supply as always. And it’s not like people are using the bathroom more often, right?

U.S. Health Secretary Alex Azar summed up the paradox in a March 13 New York Times story: “Toilet paper is not an effective way to prevent getting the coronavirus, but they’re selling out.” The president of a paper manufacturer offered the consensus explanation: “You are not using more of it. You are just filling up your closet with it.”

Faced with this mystifying phenomenon, media outlets have turned to psychologists to explain why people are cramming their shelves with a household good that has nothing to do with the pandemic. Read the coverage and you’ll encounter all sorts of fascinating concepts, from “zero risk bias” to “anticipatory anxiety.” It’s “driven by fear” and a “herd mentality,” the BBC scolded. The libertarian Mises Institute took the opportunity to blame anti-gouging laws. The Atlantic published a short documentary harking back to the great toilet paper scare of 1973, which was driven by misinformation.
Most outlets agreed that the spike in demand would be short-lived, subsiding as soon as the hoarders were satiated.

No doubt there’s been some panic-buying, particularly once photos of empty store shelves began circulating on social media. There have also been a handful of documented cases of true hoarding. But you don’t need to assume that most consumers are greedy or irrational to understand how coronavirus would spur a surge in demand. And you can stop wondering where in the world people are storing all that Quilted Northern.

There’s another, entirely logical explanation for why stores have run out of toilet paper — one that has gone oddly overlooked in the vast majority of media coverage. It has nothing to do with psychology and everything to do with supply chains. It helps to explain why stores are still having trouble keeping it in stock, weeks after they started limiting how many a customer could purchase.

In short, the toilet paper industry is split into two, largely separate markets: commercial and consumer. The pandemic has shifted the lion’s share of demand to the latter. People actually do need to buy significantly more toilet paper during the pandemic — not because they’re making more trips to the bathroom, but because they’re making more of them at home. With some 75% of the U.S. population under stay-at-home orders, Americans are no longer using the restrooms at their workplace, in schools, at restaurants, at hotels, or in airports.

Georgia-Pacific, a leading toilet paper manufacturer based in Atlanta, estimates that the average household will use 40% more toilet paper than usual if all of its members are staying home around the clock. That’s a huge leap in demand for a product whose supply chain is predicated on the assumption that demand is essentially constant. It’s one that won’t fully subside even when people stop hoarding or panic-buying.

So why can’t we just send that toilet paper to Safeway or CVS? That’s where supply chains and distribution channels come in. Not only is it not the same product, but it often doesn’t come from the same mills. Talk to anyone in the industry, and they’ll tell you the toilet paper made for the commercial market is a fundamentally different product from the toilet paper you buy in the store. It comes in huge rolls, too big to fit on most home dispensers. The paper itself is thinner and more utilitarian. It comes individually wrapped and is shipped on huge pallets, rather than in brightly branded packs of six or 12.

“Not only is it not the same product, but it often doesn’t come from the same mills,” added Jim Luke, a professor of economics at Lansing Community College, who once worked as head of planning for a wholesale paper distributor. “So for instance, Procter & Gamble [which owns Charmin] is huge in the retail consumer market. But it doesn’t play in the institutional market at all.”

Georgia-Pacific, which sells to both markets, told me its commercial products also use more recycled fiber, while the retail sheets for its consumer brands Angel Soft and Quilted Northern are typically 100% virgin fiber. Eric Abercrombie, a spokesman for the company, said it has seen demand rise on the retail side, while it expects a decline in the “away-from-home activity” that drives its business-to-business sales.

In theory, some of the mills that make commercial toilet paper could try to redirect some of that supply to the consumer market. People desperate for toilet paper probably wouldn’t turn up their noses at it. But the industry can’t just flip a switch. Shifting to retail channels would require new relationships and contracts between suppliers, distributors, and stores; different formats for packaging and shipping; new trucking routes — all for a bulky product with lean profit margins.

Because toilet paper is high volume but low value, the industry runs on extreme efficiency, with mills built to work at full capacity around the clock even in normal times. That works only because demand is typically so steady. If toilet paper manufacturers spend a bunch of money now to refocus on the retail channel, they’ll face the same problem in reverse once people head back to work again.
“The normal distribution system is like a well-orchestrated ballet,” said Willy Shih, a professor at Harvard Business School. “If you make a delivery to a Walmart distribution center, they give you a half-hour window, and your truck has to show up then.” The changes wrought by the coronavirus, he said, “have thrown the whole thing out of balance, and everything has to readjust.”

While toilet paper is an extreme case, similar dynamics are likely to temporarily disrupt supplies of other goods, too — even if no one’s hoarding or panic-buying. The CEO of a fruit and vegetable supplier told NPR’s Weekend Edition that schools and restaurants are canceling their banana orders, while grocery stores are selling out and want more. The problem is that the bananas he sells to schools and restaurants are “petite” and sold loose in boxes of 150, whereas grocery store bananas are larger and sold in bunches. Beer companies face a similar challenge converting commercial keg sales to retail cans and bottles.

I’m absolutely convinced that very little was triggered by hoarding.

It’s all happening, of course, against the backdrop of a pandemic that makes it hard enough for these producers to keep up business as usual, let alone remold their operations to keep up with radical shifts in demand.

If there’s any good news, it’s that we can stop blaming these shortages on the alleged idiocy of our fellow consumers. “I’m absolutely convinced that very little was triggered by hoarding,” Luke said. Even a modest, reasonable amount of stocking up by millions of people in preparation for stay-at-home orders would have been enough to deplete many store shelves. From there, the ripple effects of availability concerns, coupled with a genuine increase in demand due to people staying in, are sufficient to explain the ongoing supply problems.

In the long run, the industry is still optimistic that it can adapt. “We’ve got fiber supply, we’ve got trees,” said Georgia-Pacific’s Abercrombie. “It’s just a matter of making the product and getting it out.”
In the meantime, some enterprising restaurateurs have begun selling their excess supplies of toilet paper, alcohol, and other basics. Last week I picked up takeout at a local restaurant with a side of toilet paper and bananas. The toilet paper was thin and individually wrapped. The bananas were puny. They’ll do just fine.

Written by Will Oremus for Medium 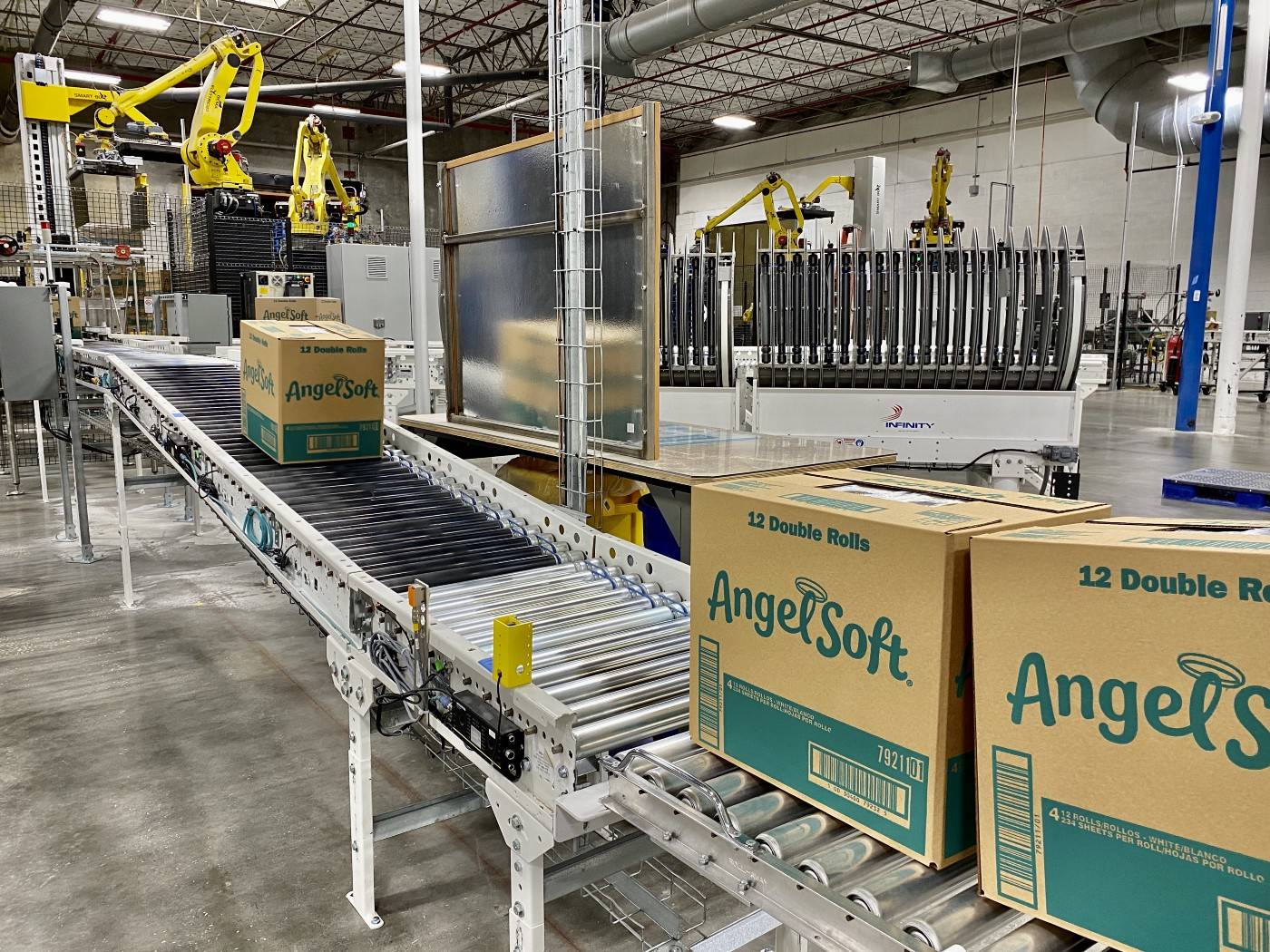